I talked to my brother yesterday on the phone. First time in months, may have been before Thanksgiving when I talked to him last. In fact, I’m pretty sure it was shortly after I started back to work. Anyway, he went out and bought himself a Xbox with his fantasy football winnings. Which is great news, now if I can just convince him to spend the cash to get a cable connection for his PC and a subscription to Xbox Live we can hang out online and play some games. Also, another of the guys from work has picked up his copy of Xbox Live and is just minutes away from being online. This is all great because now my chances of finding someone I know to play games with has increased yet again.

I was walking around the house yesterday and I realized that in order to sell the place we would have to do more than just fix the floor in the kitchen, redo the bathroom, and replace some closet doors. The upstairs carpet is shot, and the downstairs isn’t much better. If we’re really going to sell, we’re going to have to at least replace the carpet in both of the girls rooms and the stairway/hall area. It’s not terrible, and probably not all that expensive, but it’s just one more thing that we’ve got to get done before we can sell. Need to get working on these projects if we’re going to be out by July.

According to the middle school webpage, report cards went out to the students on Friday, January 23rd. This wouldn’t really be news, except that here it is the 29th and I still haven’t seen a report card for either of the girls. Looks like the shenanigans are going to continue through this year. Which is bad because I think they really will hold Karin back this year. Kirra on the other hand will simply not be allowed to graduate High School until she gets the required credits. I think I’m in for a wild ride in the next couple of years. Can’t wait to hear how the boys are doing. 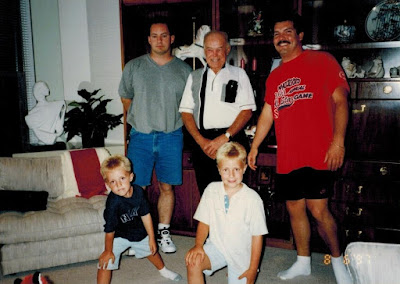 My mother tells me that my grandfather died on 12/24/2003 and that their is some sort of inheritance. I can’t imagine what kind of inheritance there could be; $5000, $1000, nothing. Whatever it is I’m not going to get my hopes up. The man was retired for nearly as long as I can remember and I’m sure he didn’t have a lot stuck away for the kids. Well, now that I have the date I need to dig out the scanner and put together a memorial page for him.