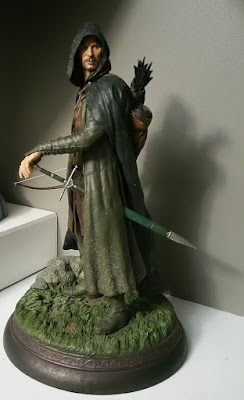 Suddenly Frodo noticed that a strange-looking weather-beaten man, sitting in the shadows near the wall, was also listening intently to the hobbit-talk. He had a tall tankard in front of him, and was smoking a long-stemmed pipe curiously carved. His legs were stretched out before him, showing high boots of supple leather that fitted him well, but had seen much wear and were now caked with mud. A travel-stained cloak of heavy dark-green cloth was drawn close about him, and in spite of the heat of the room he wore a hood that overshadowed his face; but the gleam of his eyes could be seen as he watched the hobbits.
‘Who is that?’ Frodo asked, when he got a chance to whisper to Mr. Butterbur. ‘I don’t think you introduced him?’ 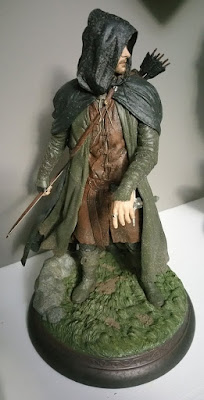 ‘Him?’ said the landlord in an answering whisper, cocking an eye without turning his head. ‘I don’t rightly know. He is one of the wandering folk—Rangers we call them. He seldom talks: not but what he can tell a rare tale when he has the mind. He disappears for a month, or a year, and then he pops up again. He was in and out pretty often last spring; but I haven’t seen him about lately. What his right name is I’ve never heard: but he’s known round here as Strider. Goes about at a great pace on his long shanks; though he don’t tell nobody what cause he has to hurry. But there’s no accounting for East and West, as we say in Bree, meaning the Rangers and the Shire-folk, begging your pardon. Funny you should ask about him.’ But at that moment Mr. Butterbur was called away by a demand for more ale and his last remark remained unexplained.
Frodo found that Strider was now looking at him, as if he had heard or guessed all that had been said. Presently, with a wave of his hand and a nod, he invited Frodo to come over and sit by him. As Frodo drew near be threw back his hood, showing a shaggy head of dark hair necked with grey, and in a pale stem face a pair of keen grey eyes.
‘I am called Strider,’ he said in a low voice. ‘I am very pleased to meet you. Master – Underhill, if old Butterbur got your name right.’

–The Fellowship of the Ring, J. R. R. Tolkien

Strider. Ranger of the North. Confidant of Gandalf the Grey. Heir of Isildur. Rightful claimant to the thrones of Arnor and Gondor. 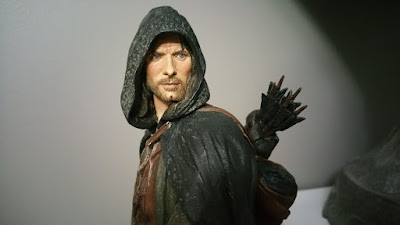 This was supposed to be a Christmas present, but I became impatient and unpacked it early. I was crazy excited to have snagged this on ebay for a third of what they were selling for. Then when it arrived I was disappointed to realize that the $1,100 statues were all the ‘exclusive’ ones. They came with a second head sculpt, the one you see, and another with the hood down and a damn good sculpt of Victor Mortensen. Mine did not come with that second head. But when I realized that I’d be displaying mine with the hood up anyway, my disappointment was lessened. I’m not big on visualizing my favorite characters as a particular actor. Though, having said that, I think it was a very good portrayal.

Strider was always my favorite character from the Lord of the Rings. I don’t know how many D&D characters I modeled on him, but it was a lot. I’m very happy with this little guy and he looks good standing on my shelf.

This is a 1/6 scale, polystone statue (you can read that as hard resin). It is about 14-inches tall and is the same scale as my Buck Rogers, Flash Gordon, and Angel statues. The details are great. The cloak and boots are speckled with mud. He has a pack, bedroll, and quiver strapped on his back; ready to disappear into the woods. The sword looks great and the bow is strung with a thread.

Merry Christmas to me, but as always thanks have to be extended to Lady Ronn for allowing me to indulge in these excesses.