I did pretty well last week, posting every day. This week has been less good. I’ve been playing around with both my microphone and camera set-ups in anticipation of getting back to the podcasting and video posting. Nothing on either front yet, but I’m working on it. Next week is the last week of the semester, so I should be switching gears here shortly.

Tonight, I was working on the basement shelving. Class was canceled, so I had a free night. I had an opportunity to use my new Kreg Shelf Pin Jig and I’ve got to say, it’s pretty slick, easy to use, and really quick. I would recommend it to anyone thinking about getting one. I like the idea behind all the Kreg stuff, but I have to admit that all that blue plastic really turns me off. Because of this I always hesitate to pick up their stuff.

Yes, I know. Somethings should just not be put on the internet… I blame Google Photos Assistant for making these silly things. Later.

I’ve given everything a thorough cleaning. Through a combination of several plugins (Anti-Malware, Sucuri, Wordfence, and Bluehost) I think I’ve cleaned the bug from my site. And that is not an invitation to test my security. I shut off the comments, changed the passwords, removed a couple ‘users’,  and tightened things up. As an added bonus, I seem to have deleted the entire baenrahl site–accidentally. That last bit makes me less than happy, given the current back-up situation around these parts.

I don’t know what I’m going to do about baenrahl.com, if anything. It’s been a while since I did anything with that stuff and the RPG aspect sorta didn’t go anwhere. So, what to do? Whatever it is, it’ll be starting from scratch.
I still need to get on the phone with Bluehost and get what I’ve got coming to me, ensure we’re on the same page, and generally read them the riot act. But for now, I think I’ve got everything cleaned up and locked down.

I dragged the vanity and sink top upstairs and into the bathroom. I slid the vanity into place and realized that this isn’t going to work. There is a center rib on the back of the cabinet that is there to hold the brackets for the drawers, it is also perfectly lined up with the drain and water line. I tried to think of someway to re-engineer the cabinet, but no can do.  So, plumbing is going to need to be moved. Let’s cut into the wall…


I know that drywall patch looks terrible. I’ll be putting a second coat of mud over it, but it’ll be behind the vanity and no one will see it, until the next remodel. I feel bad about it, but not as bad as I feel about having to cut into my new wall. Grrr…

I’m back on the sauce. I was trying to break the caffeine habit by drinking green tea, but the call of my weekend routine was too strong. That routine works out to a pot of coffee on Saturday and another on Sunday, no sugar, but lots of artificial creamer. So cheers to you and let’s see what I got up to over the weekend.

It’s been a long time coming, but on Sunday I put the knife in the vinyl cutter and gave it a test run. I checked Amazon and apparently I ordered this thing on October 30, 2016. I’ve taken my own sweet time in getting any use out of it. I should be ashamed of myself.
I used the green, because I can see no project in the foreseeable future that will require or necessitate green vinyl. My other choices were black, white, yellow, or red, and three of those colors have very obvious uses with regard to arohen dot com. As you can see in this first picture, I was not very careful in my weeding and I let the vinyl roll back onto itself and ended up tearing off an arm, but otherwise, consider me suitably impressed.
What is weeding? I’m glad you asked. Weeding is the process by which unnecessary vinyl is removed from a design. It wasn’t bad on this design, but I imagine it can be tricky when working with small letters or intricate designs. On the design below, I had some problems with the finer bits lifting off the backing and wanting to curl up. I imagine I just need more practice.

I tried something a little smaller and included the outline to determine how precise the cuts are. You can see that it mostly worked out well. There is one section above the upper arm where the outline didn’t survive. I haven’t worked up the courage to try a two or three color, layered piece quite yet. Honestly, just getting the blade depth set right nearly put me out of my mind.
Lady Ronn is already asking for T-shirts for her upcoming bridal shower. So I should probably get this process down and figure out how well lettering works. And I think somebody’s car is going to get a sticker…

Woot! Money. Money. Money!
Still waiting on the state check, but the Federal refund has been deposited. Super fast. Very exciting. Very cool.
Time to payoff some of these projects.

I was looking for inspiration for a post today and I came up empty.
Killian, our cat, is going in to get fixed tomorrow morning. Shouldn’t that be broken? Whatever, you know what’s going to happen and it’s happening tomorrow. That makes for a terrible post. What else you got?
I have this amusing animation from my Google Photos…. It’s me with an octopus on my head.


No?! Well, I got nothing then.
Nothing.
Come back tomorrow and maybe there will be something more. Later.

I can’t say for sure that this is the first snow, because I just don’t pay that much attention, but this is the first accumulation of snow for the season. Sure we’ve had some flurries, and there might have even been a dusting of snow, but this is the first time it’s impacted things like driving, commute times, and resulted in soggy shoes. It’s not much, it’s probably less than an inch, maybe just an inch. If the sun doesn’t come out, it will be the first time I have to shovel my driveway this season.
I spent some time last night putting together a couple of truckcasts. I put one up yesterday and I’ve got one in the can, waiting in the wings, on deck, whatever… I have one finished that I haven’t posted yet. I’ll put that one up on Monday, so you have that to look forward to.
Here’s a little behind the scenes gif for your viewing pleasure. As you can see editing truckcast is not all fun and games.

Despite my talk of everything on the site working properly, I realized that my image files for all of the old posts still have their their dated database locations in the code. Which is a problem, given that I no longer have the database sorted by month and year. So those locations don’t exist anymore. Looks like I have some post editing to do this weekend.
I also have a final to study for in my Air Conditioning Theory class. Tuesday will be my last class of the Fall semester. Then I get an almost four week break before diving right back into the winter semester on January 8th.
I’m sure I’ll have more later, but that’s it for now.

Grand Rapids did their fireworks on Saturday, July 2nd, and we were right on the water behind DeVos Place… where we were not supposed to be, I might add.

I had the idea that if we parked north of the city and watched the show from Riverside Park, Canal Park, or 6th Street Bridge Park we could see the show and avoid the worst of the crowds. But we just kept walking, past all the parks and we still couldn’t find a spot.
Heidi had the idea that we could cut through the DeVos Place parking garage and come out on the other side, effectively circumventing the blocked sidewalk. That didn’t work when we realized the gates were down on the Lyon St exit. So she rerouted and went into the building, where we wandered around a bit until we found ourselves infiltrating the 2017 annual convention of the Church of the Brethren. We joined them on the back patio to watch the fireworks, but the trees blocked most of the view. So we slipped back into the building, down a bit and back out to the riverside walk. The closed section of the riverside walk, where only the convention attendees were allowed. And then we watched some fire works.

It wasn’t our intention, but it worked out pretty well.

Google Photos is a thing, right. I mean, people use this thing. I decided that I’d move some of my pictures to it and see what kind of benefit I get from it’s use. I don’t have high expectations. Much like Amazon Photos, I expect it will be a place where I can put pictures and then never find what I’m looking for. As an added bonus, Google Photos makes these nice collages out of some of your pictures. You can make your own, but it makes some all on it’s own, you know, to get you inspired. 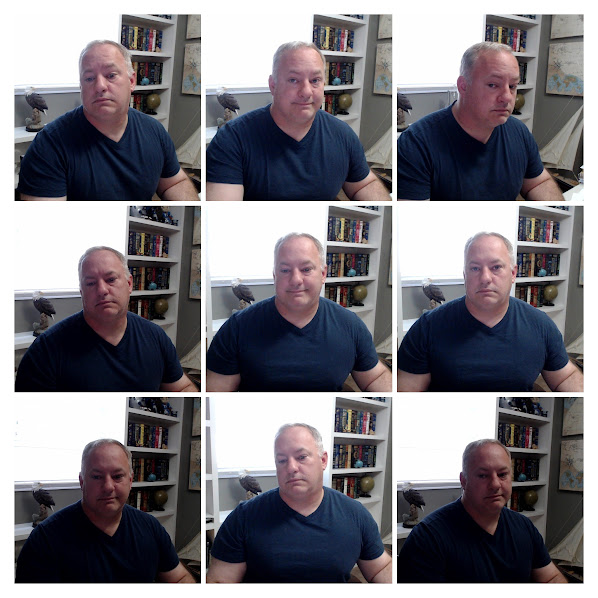 It also takes pictures and makes animations… which are essentially the same thing as an animated gif. Not all of  the results are, shall we say, complimentary. Take this one for example…

Whatever it decides to put together, just be warned that some are better than others.

Welcome to the new, Blogger powered incarnation of RonnMcCarrick.com. I’m not sure if this is the way I want to go, but so far I’m satisfied with what I’m getting for my money. It’s free. And while I do not have the same options and customization available in WordPress, I also don’t have the headaches of dealing with all that customization. As an added bonus, I don’t have to pay for a host either.

I know this isn’t writing related, but I’ve been playing around with Google Photos and I wanted to share. Some of the things it does when you upload your pictures is to sort your pictures with facial recognition, generate animations, put together collages, and make what it calls movies. That last thing is really little more than a short slide show, but I haven’t looked into it much.

I’m amused by some of the animations that have been generated, and under the guise of introducing myself, I thought I’d share a few of them.

So here for you enjoyment and potential mockery are three of the animations that were generated by my Google Photos account.